The Chippewa Yacht Club is a members only website Incorporated 1895 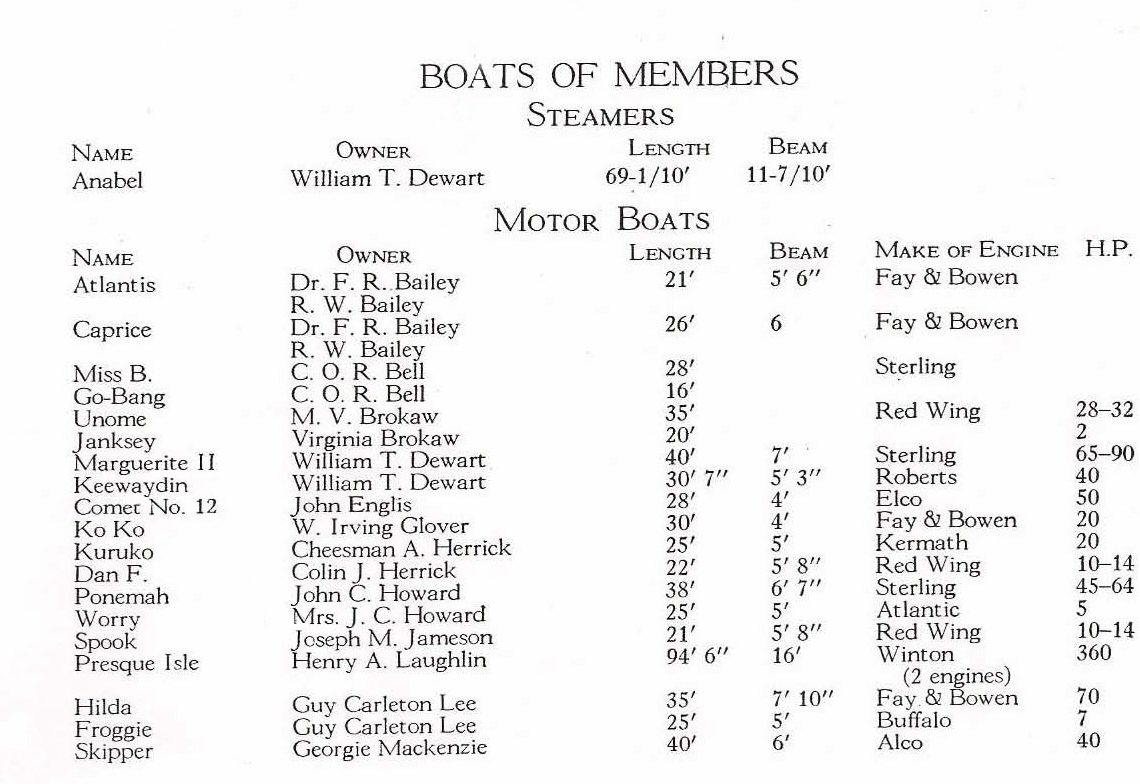 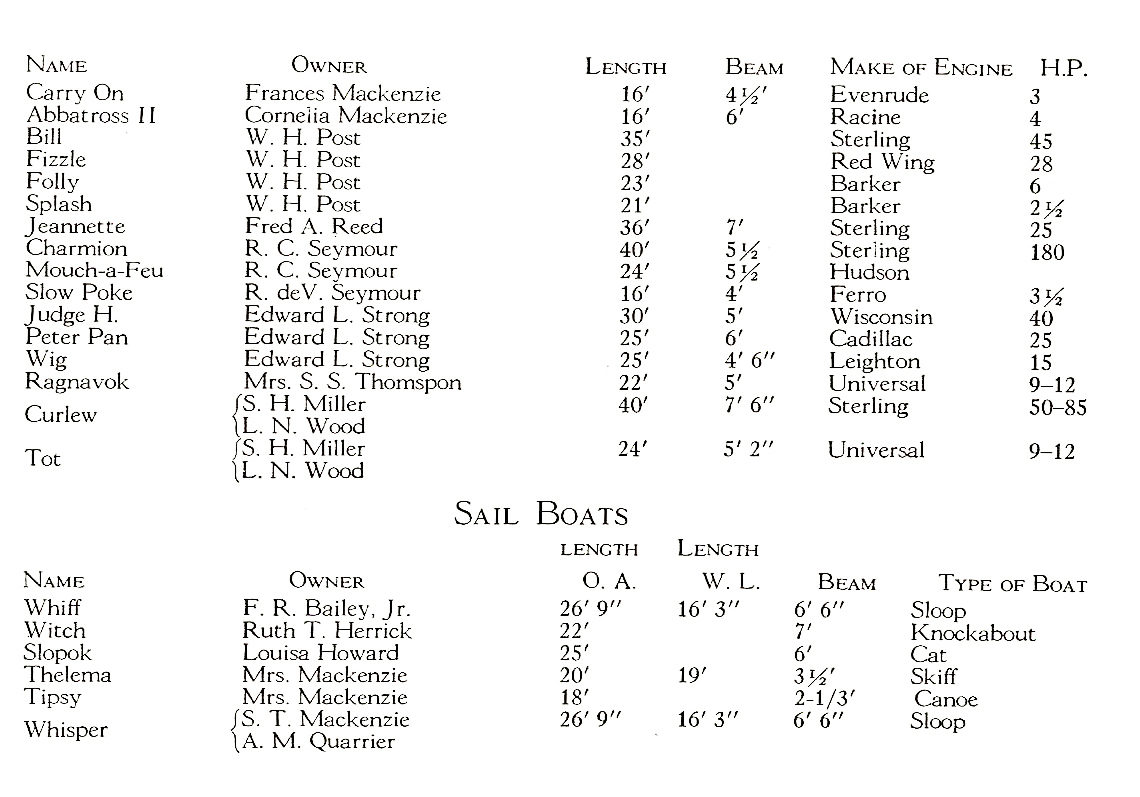 The House Committee has planned for a social gather­ing every Saturday afternoon during the racing season, at which  time tea will be served on the Club House veranda. Various ladies of the Club will act on the different afternoons as hostesses.

It is hoped that  a photograph  album  may be started to contain pictures of the Yacht Club activities, races, members’ boats, etc. Members are asked to donate pictures.

The Regatta Committee expects to make the season of 1921 one of the best in the history of the Club.

The usual Saturday races will  be  held  during July and August. It is hoped that these races will be even more largely attended than  last summer.  It is planned to have the races on Saturday afternoons.

Several interesting events are being planned for the 4th of July, which will mark the opening of the racing season.

A perpetual trophy has been presented to the Club by Dr. Guy Carleton Lee for annual handicap sailing races over the Chippewa Yacht Club course. These races will be open to all sailboats whose owners are members of organized yacht clubs. The races for the cup this year will probably be held during the week ending August 6th.

The Annual Regatta will be replaced this year by a race-week to be held during the week  ending  August 20th. Races and water sports of all kinds  will  be  in­cluded  in  the events of  this  week.

A winding, well-shaded path  leads  from  the  Club House to the tennis court, on the opposite side of  the island. This   court   was originally   accurately graded and fully enclosed by the owners of Wyanoke, and was recognized as one of the  best  courts  in  the  Chippewa Bay region. Through  the kindness of  Mrs. Orcutt, this court has been included in the lease to  the  Chippewa Yacht Club, and it will be used , during  the season  of 1921, as a Club court.  The  management of  the  Club has had the court resurfaced and put in first-class condition.

Tennis privileges arc extended to al l members of the Chippewa Yacht Club. The Tennis’ Committee  urges all interested in the game to make full and frequent use of  the court.

The week of August 8-13th has been(set aside as Tennis Week A Club Tournament will be arranged, comprising men’s singles, ladies’ singles and mixed doubles. The finals in all three events will be played Saturday, August 13th. Cups will be awarded to the winners, and tea will be served on the Club House veranda, after the matches.

This Association shall be known as the CHIPPEWA YACHT CLUB.

There shall be an Executive Committee, consisting of the Commodore, Vice-Commodore, Rear-Commodore, Secretary, and Treas­urer, and one other member; and House, Regatta and Tennis Com­mittees each consisting of five members.

The officers and  Executive Committee  shall be elected at  the annual meeting, to be held in Chippewa Bay, in August of each year. The election shall be by ballot, and a majority of the votes cast shall be necessary to a choice. The officers and committees thus elected shall hold office until their successors are elected. A vacancy in any office shall be filled by appointment by the Executive Committee, and the person so appointed shall hold office until the next annual meeting and until his successor is elected.

DUTIES OF OFFICERS AND COMMITTEES

Sec. 1. It shall be the duty of the Commodore to command the squadr0n. to preside at all meetings, and to enforce the laws and regulations. He shall call a meeting of the  Club at the written request of three members, or he may do so at his discretion.

Sec. 1. The Regatta Commit tee shall consist of five members appointed annually by the Executive Committee. They shall re­ceive entries for all regattas, act as judges thereof, and in event of the absence of any of them appoint a substitute or substitutes, pro­vide stake boats, appoint members to assist the committee, and direct a ll matters connected with regattas. All disputes shall be subject to their decision, which in the case of a motor race shall be subject to the rules of the American Power-Boat Association, and in the case of a sailing race be based on sailing rules and regulations so far as they apply, and when not, the ordinary customs of the sea shall prevail. They shall have full power, with .or without protest, to disqualify any yacht which shall have violated  any rule of the Club or custom of the sea. They shall have no power to alter or abridge the rules or regulations in any respect, nor to make any special rules inconsistent therewith . They shall choose one of their number to act as secretary for the committee, whose duty it shall be to keep a record of the proceedings of the Committee with full details thereof.

Each candidate for membership must be proposed, in writing, by a member to the Executive Committee, who alone shall have the power to elect and who can exercise that power at any time.

Sec. 1. The entrance fee shall be three dollars.

3. When the dues of any member shall remain unpaid for the space of one month , the Treasurer shall notify such member, and if remaining unpaid a  month  longer his membership shall  terminate

Sec. 1. The annual meeting shall be held  in Chippewa  Bay, in August.

This Constitution may be amended by a two-thirds vote of a ll present at any regular or special meeting of the Club; the proposed amendment having been stated in the call for the meeting.

Notices shall be sent to every member of all meetings at least ten days prior thereto. Notices for”special meetings shall state the pur­poses for which they are called.

All reports of Officers and Committees shall be in writing and, if accepted, filed with the Secretary.

Sec. 1. Every yacht owned or chartered by a.member or members of this Club may be enrolled in the squadron of the Club by owner’s  filing with the Secretary a description thereof.

Sec. 1. The distinguishing signal of the Club shall be a pointed burgee of a blue ground with a white longitudinal bar through the center.

Sec. 1. The Commodore shall fly a broad blue rectangular pennant with a white horizontal bar through the center.

pennant with a blue horizontal bar through the center.

All regattas shall be   sailed over the Chippewa Yacht Club course

All races or power-boats shall be governed by the rules or the American Power-Boat Association, or which the Chippewa Yacht Club is a  member.

These By-Laws may be altered or amended by a two-thirds vote or all present at a regular or special meeting or t he Club, the pro­posed amendment having been stated in the call for the meeting .